Every year, the spirits of the past visit the holy grounds of Washibara Hachimangu Shrine in the small castle-town of Tsuwano (Shimane Prefecture). 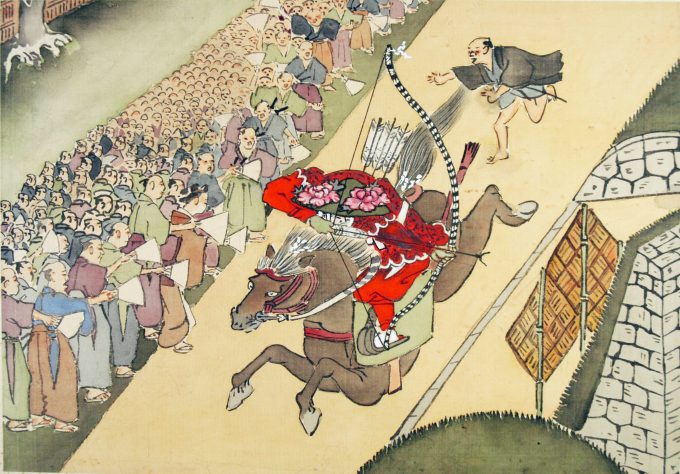 Tsuwano Hyakkeizu (One Hundred Views of Tsuwano) No. 36

Under the blossoming Sakura trees (Japanese Cherry), riders in traditional samurai clothes (same as in the Kamakura period, 12th century) gather, bows and arrows are lined up to perform in front of the Hachiman deity (god of archery and war).

Yabusame is practiced in many parts of Japan, but Tsuwano is special in that the holly grounds of Washibara Hachimangu Shrine was specially built for horse archery some 450 years ago. It was also recorded 150 years ago in many pictures of the “Tsuwano Hyakkeizu” (One Hundred Views of Tsuwano). 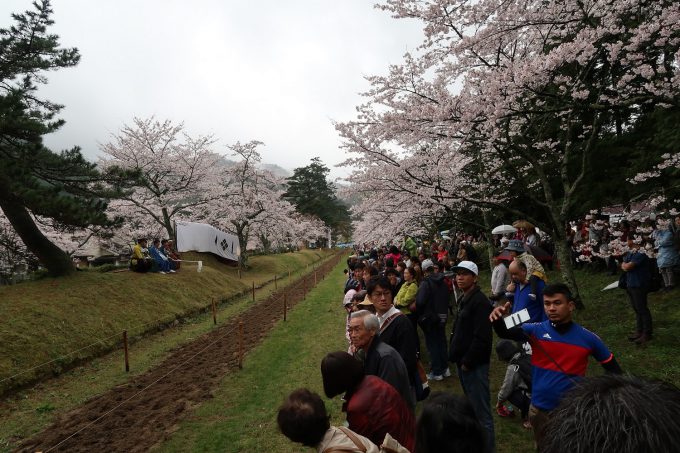 This year the cherry blossoming had perfect timing, but it was drizzling slightly. Even though the unfortunate weather, many people, Japanese and foreigners, gathered on the grounds of the shrine. It is recommended to go a bit early, because the good places are taken by early-birds more than half an hour before the start.

First, there is a ceremony for the riders at the Hachimangu shrine, which is followed by the march, where the riders along with the bows, arrows and targets are presented to the public. The horses were a bit stressed, which is understandable as the sea of waving umbrellas were probably a bit unsettling view for them. 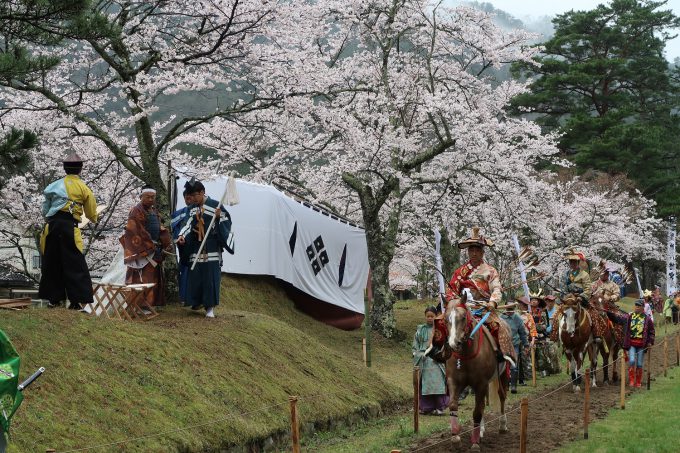 After a long wait, the first rider set off, but as he has to perform a few extra moves during his ride, which is part of the ceremony, it was a bit more difficult than usual for him. This year, added the difficulty of the rain and the umbrella-stressed horses, the first rider didn’t hit the targets. The second rider had better luck. The arrows have a weight attached to the tip, so when the arrow hits the target it gives out a loud blunt noise, and upon hearing it, the crowd burst out in cheers and clapped instantly. The weight of the cold weather, the unforgiving rain and everything else that made the day a bit difficult, everything was lifted by the cheerful sound of a successful ride, with all three targets hit. 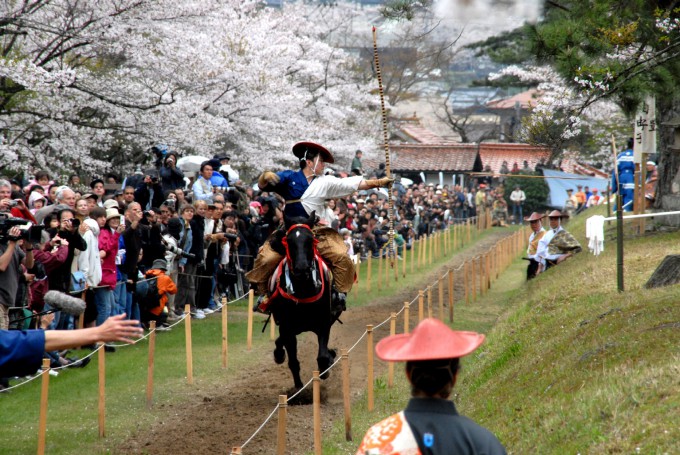 Horseback archery is still a rare experience to have, especially with the Sakura Cherry blossoming as a background. Together with a stroll through the old castle town of Tsuwano, it makes for a perfect trip. And to top everything, you can take a steam locomotive to, or on the way back from Tsuwano.

I highly recommend it in April, if you are in or going through the western part of Honshu (Chugoku region, Hiroshima, Yamaguchi or even Fukuoka prefectures).

There was a free shuttle bus service from Tsuwano station (also stopping at big parking places), with English guides waiting at both ends of the bus ride. We were also given a short English introduction of the past of the Yabusame (horseback archery), as well as a small map of the area.