Mt. Aono power-hiking, a bit of a challenge 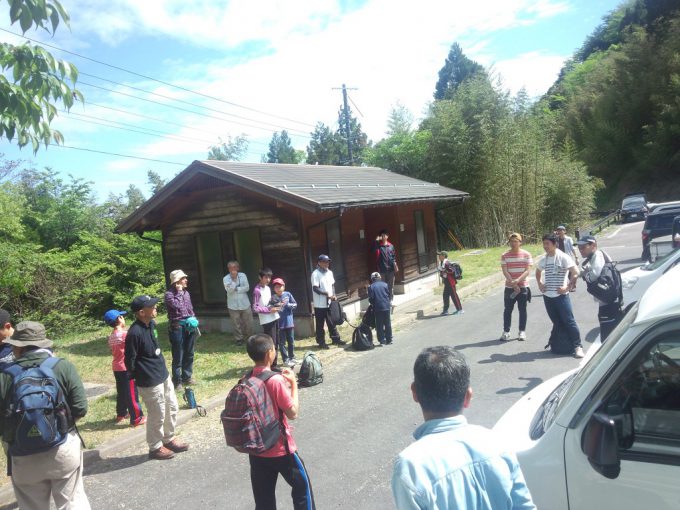 I participated in a hiking tour in Tsuwano. Together with about 50 people we climbed up to the top of Mt. Aono (about 900m/2900feet high,), with an elevation difference of 800m (2600feet) from start. The course consisted of two parts; first starting from the old town center of Tsuwano climbing to Aonogawara parking area, and from the parking area to the summit of the mountain. Half of the group joined us at the parking area.

Our guides, source of interesting stories

During the climbing, our guides told us a few things about the mountain, the forest and some plants. Poisonous as well as edible plants were shown to us, and finally I understood why all the professional climbers and the children had bells on themselves: there have been a lot of bear sightings in the very forest, we were walking in.

It was a challenge indeed 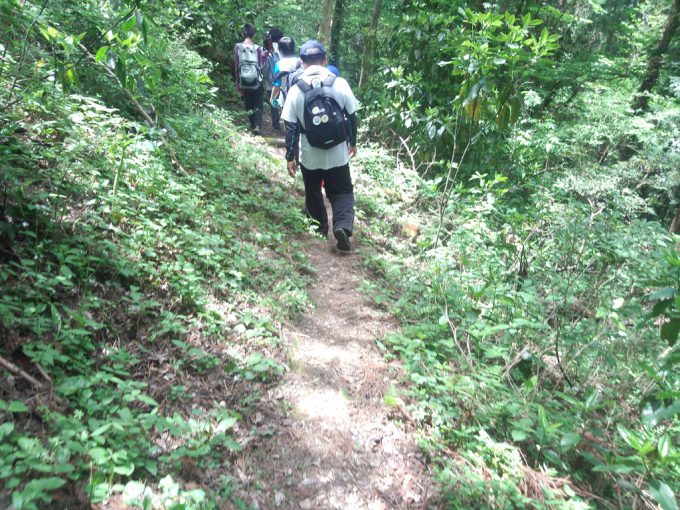 I have to be honest, I was taking this outdoor event a bit lightly. It might have been that I was thinking about “hiking” rather than “mountain climbing”, or that the advertisment wrote “anyone can participate”, and I interpreted this as “from the age of 1 to 99”. While it is not impossible to climb up (some elementary school students climbed up too), it is quite a feat. The slope was very steep, for a good part it was basically man-made steps in the forest, and while we didn’t move much in terms of distance on the map, it was like climbing up a skyscraper. An added difficulty was, that even with the built stairs showing that the path is taken care of, some parts of it were less than 30cms wide.

View from the top 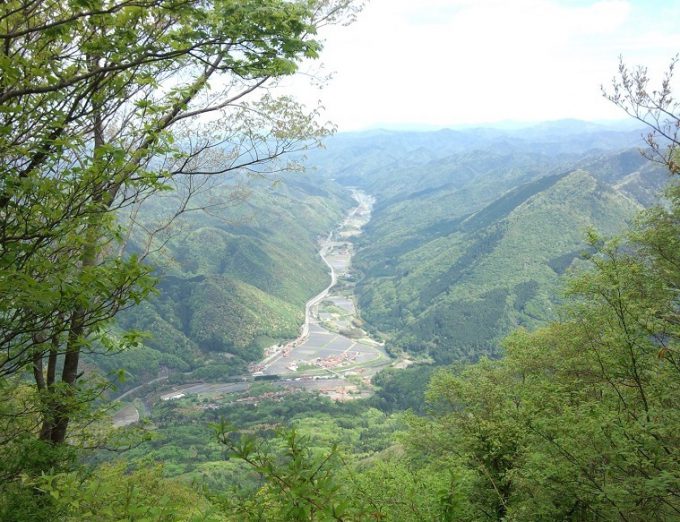 Sometimes there would be openings in the forest, where you could see the surrounding of the mountain with breathtaking views, as well as there are a few good lookout places on the top.

Towards Nichihara, you can see the road and a line of rice paddies. At the time of climbing, it was taue (rice planting) season, thus the paddies were glittering in the sunny spring day. 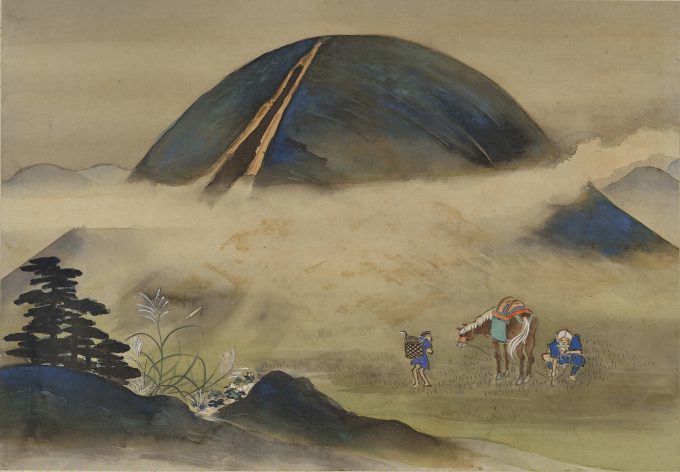 The explanation for the picture Hyakkeizu No. 80 writes, that “Mt. Aono has been described as […] a landmark used by fisherman far off in the Japan Sea, and as a place to train domain retainers and warriors.”

Looking up at the mountain from Tsuwano’s old town, it is truly majestic, and towers over the small castle town, but only by climbing to the top, did I understand these words from the past (written 100 years ago).

From the top, we could see Masuda City and Taka island, some 40km/25miles away. Masuda City was still in the Tsuwano domain in the shogunate, so, similar to the famous movie’s line: “everything what you see (from the top of Mt. Aono) was Tsuwano Domain”. And the climbing, if done in full armor, is quite an endurance excersise for the samurai.

View from the top, towards Masuda City

(I do apologize for the photos, they were taken with an old phone and the yellowsand from China was in the air)

On the way back to the town, we did stop at Shourinzan Tenmangu Shrine. It was built in 1663, when the chief retainer Tago Mondo transferred the “goshintai” (sacred object of a spirit or deity) there. The shrine now is has only a few visitors, because it is a bit out of the town, but it is still looked after. 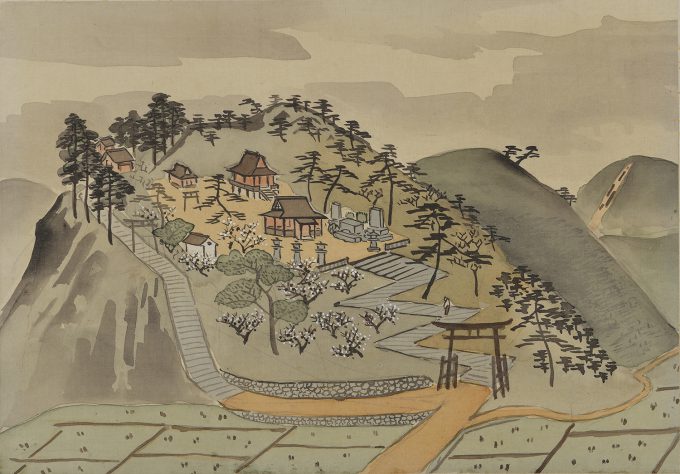 Stairs to the Shourinzan-Tenmangu Shrine today 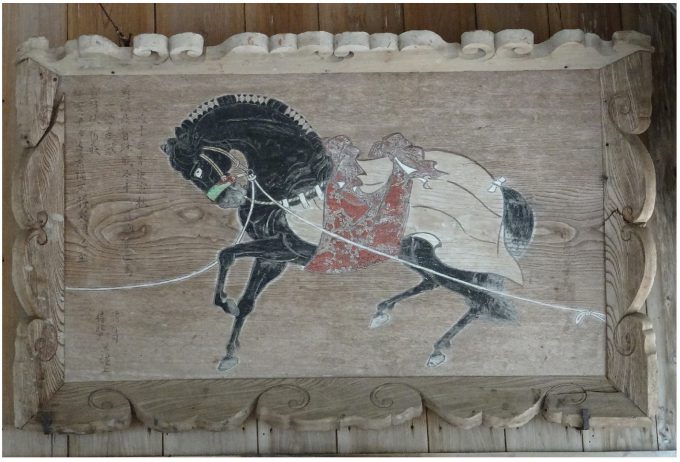 Painting in the shrine

Connecting to the shrine, Tenjin Festival was held in April, at which participants carried a mikoshi (portable shrine) across the Nishiki River, down from the Shorinzan Shrine. If you deciede to climb the mountain, just imagine that a heavy portable shrine was carried across the river, up and down from the shrine by the worshippers. It must have been a hardship, and thus good offering  to the gods.

Sadly, the festival, due to aging community, has not been held “in the river” in the past 5 years. 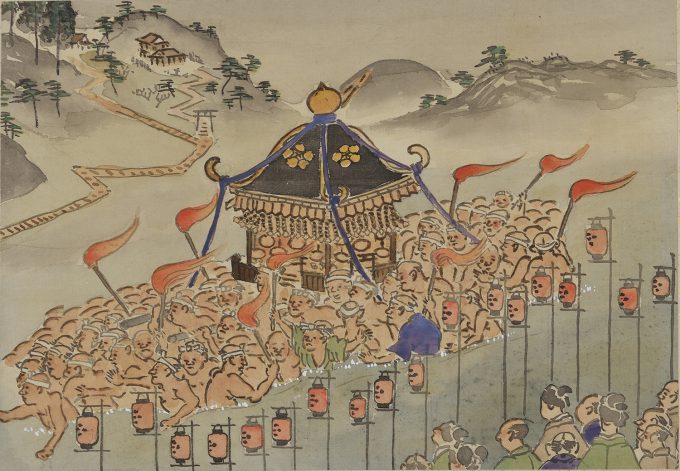 There are hiking maps available at the tourist office in Japanese. Guided tours are irregularly conducted, mostly together with the local residents.