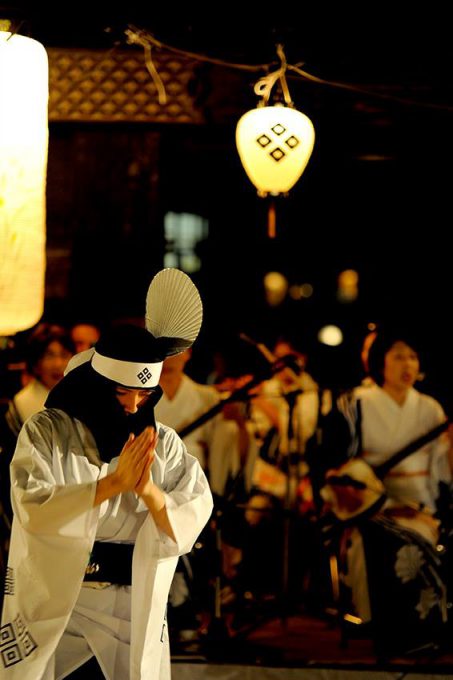 In Tsuwano, the Bon-Odori, or festival dance of August is also called the Tsuwano-Odori (Tsuwano Dance). While wearing a black hood (kurozukin), as well as a white headband with round fan up high, participants dance in an elegant manner at a relaxing tempo. Features of the Nenbutsu-Odori (a Buddhist dance form) popularly performed in the medieval period remain. 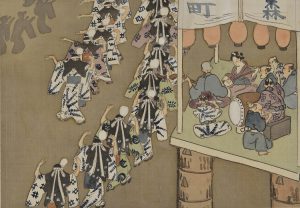 Hyakkeizu No. 99 The Bon-Odori (festival dance)

It is said that Kamei held the first Tsuwano-dance when he arrived as the new castle lord to Tsuwano in 1617, making it this year (2017) the 400th year that this dance is performed. The origin of the dance, and the unique costumes with the black hood (kurozukin) covering the face, goes back even further.

Before the Kamei clan came to Tsuwano, they were ruling part of today’s Tottori prefecture. Once, the clan was trying to take a castle, which proved to be particularly strong, and a new strategy was needed. The lord ordered his men to dress up in this unique costume an dance. For 4 years, once or twice a year they danced in the village below the castle.

In the 4th year, he ordered his soldiers to stand in full samurai armor and weapons ready to fight, and then put on the same costume. They even used small bells attached to their sleeves, to hide the sound of the armor. The castle garrison though it is the usual festivities, and came down to the village to participate in the dance. Little did they know, that this time, they are dancing with the enemy. After a short fight, they fled the village, and the Kamei clan could finally take over the castle. To celebrate this victory, the dance is performed in the same type of costume, which covers most of the face, every year. 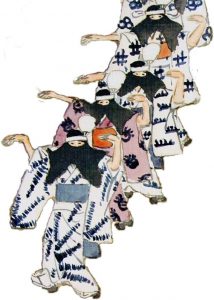 The Tsuwano dance is held at various locations around the castle town, from 10th to 15th of August.

For the 400th anniversary of Kamei clan coming to Tsuwano, and the start of the Tsuwano-odori, we hope to have 400 dancers on the 15th of August. Please, do join us not just for the festivities, but also for the dance.

Be one of the 400 memorial dancers!

For more details, please contact the Tourism Association of Tsuwano at tsuwanok@tsuwano.net