The Yasaka-jinja Shrine was transferred from Kyoto’s Yasaka Shrine in 1528 to the Otanishimo-hara area of Tsuwano by Yoshimi Masayori. The Kamei family set up a Gion resting place in 1617 at the current site, and then built and relocated the resting place at the main shrine in 1660. Following a massive fire in 1853, it was reconstructed during the Ansei era (1854-1860) by the Kamei family.

In the upstream portion of the stone wall facing the river, there was a device called the “Turtle Shell” that would ease the force of water current. Although some rebuilding of the shrine’s stone walls is visible, the oldest stonework structural remains can be found at Tsuwano’s river. 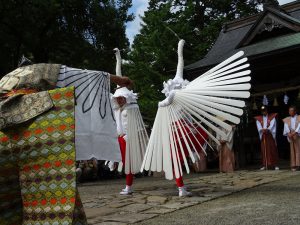 Another important story about the Yasaka-shrine is that this is the place where the Goin festival and the Sagi-mai (Heron dance) starts from, on the 20th of July, and also where the deity returns to, on the 27th of July.