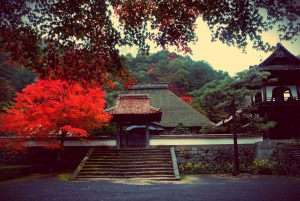 Youmei-ji is a temple built in 1420 by the feudal lord of Tsuwano domain at the time, the Yoshimi-clan. The temple served as the family temple for the successive feudal lords of Yoshimi (1282-1600), Sakazaki(1601-1617) and Kamei(1618-1871). This temple was one of the Japan’s two greatest Soutoushu (religious sect) temples in Edo Period (1603-1867). It had as many as 77 branch temples in this region and was called Sekishu Honzan (headquarters). 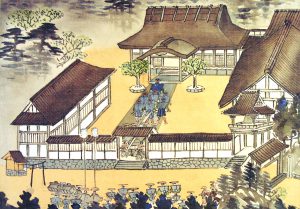 Located at the western foot of Tsuwano Castle, the Yomei-ji Temple was the domain lord’s family temple for successive generations; however , the relationship was severed when Koremi Kamei changed funerals and ceremonial occasions to Shinto style.

This view depicts a scene in which the domain lord is paying a visit at a time when the Yomei-ji was still the family temple. The domain lord has exited the palanquin at the inner gate and is walking toward the main hall. The view also shows his attendants waiting outside the inner gate. 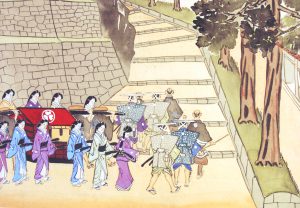 In 1862 the alternate attendance (to Edo) system was abolished, allowing domain lord wives and children who were in Edo to return home. Mitsuko, the wife of Lord Koremi Kamei, departed Edo in November of that year and arrived at the palace in Tsuwano in January of the next year. A procession began to form and a formal visit was made to the Yomei-ji Temple. This view depicts the procession as it moves up the hill to the Yomei-ji Temple. The crest on the palanquin is a “three-leaf hollyhock in a circle”, the family crest of Lord Matsudaira (wife Mitsuko’s family) of Sanuki Province’s Takamatsu Castle. The obi (sashes) worn by the accompanying maidservants are tsutsu-obi (tube sash belt).

An interesting story about Youmei-ji, is during the modernization of Japan, when the cast systems was abolished, the main gate between the samurai and merchants from the Tono-machi street was moved to this temple. Drawing No. 26 The Somon-gate at Tonomachi from the Hyakkeizu (left) shows the gate, from the samurai side, called Tono-machi street. Behind the gate is the merchant district, now called Hon-machi. The gate as seen on the picture (right) is the one that was moved to the entrance of the temple from the center of the castle-town.

When you enter the Youmei-ji imagine, that you are crossing the gate, that separated the ruling Samurai class from the commoners.

The temple has also a beautiful garden, where the thatch-roof of the main building together with the tile-roof  of the side building makes for a beautiful background.

In japan, if you wonder into the garden, and see a small of this size with often a rope around it, it means that that road is temporally closed. This sign comes from the Japanese tea-ceremony, and is a subtle way to tell guests where to go, a lot better than a big harsh sign.

Youmei-ji temple is also where one of the leading writers of the Meiji period Ougai MORI was buried, also known for being a Surgeon General of the Army, the highest rank in the Medical Corps.