The Tsuwano Castle is portraid in the first and second drawing of the Tsuwano Hyakkeizu 100 views of Tsuwano. The first drawing shows the main fort at the end of the Edo period (1600-1868). Notice that the main keep is already missing on the drawing of the castle 150years ago, read more for the reason.

The second drawing shows Demaru, which is a fortification north from the main castle. It was built in 1324 by Yoshimi Naoyuki, when he enlarged the main keep. At the present time, it is closed due to restoration works on the stone foundations. Reopening is scheduled for 2020.

The first fortification on Shiroyama (which translates to “castle hill”) was built by the Yoshimi clan in 1295. A line of defense structures were erected from Tsuwano all the way to today’s Masuda city at the Japanese Sea, as a preparation for the possibility of an attack coming from the sea. The location of the castle was selected partly because of the topography, a high hill, almost surrounded from all sides by the winding river, with a good sight on the road leading from Yamaguchi and Hagi to Iwami country (currently South-Shimane prefecture). It is said to be the second highest castle in Japan, after the Takeda castle.

At the beginning of the Edo period (1600-1868) the Sakazaki Clan improved the castle with stone fortifications on the main keep and on the external keep. While the Sakazaki Clan was only ruling Tsuwano for 16 short years, but most of the development happened during their time, and the overtaking Kamei Clan (which ruled until the end of the Edo period) only had to make small modifications. 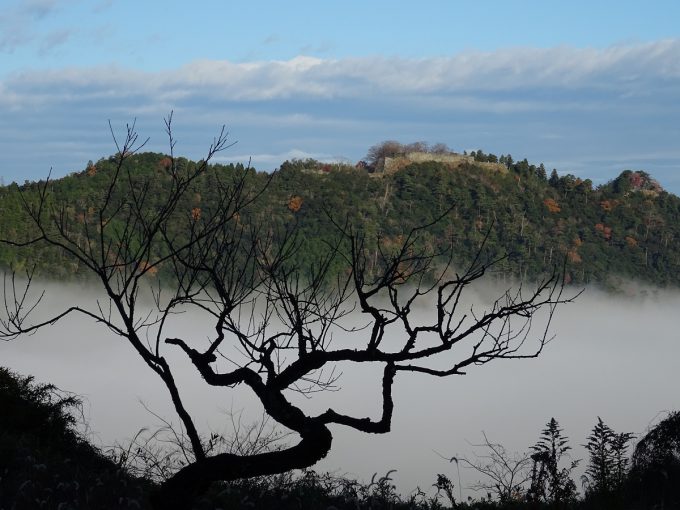 The castle was disassembled in the beginning of the Meiji period, under the ordinance of the capital. Since the Meiji government did not want to leave any possibility of uprising rural leaders, they destroyed all the fortifications except for a few (like Kumamoto and Matsue castle). Unlike other castles in Japan, Tsuwano Castle lost its main tower (old tower) in a fire in around 1680. And surprisingly enough, it wasn’t even during a battle, it was a rainy day, with a thunderbolt hitting the main structure. Since the domain lord was living in the palace down by the river, and Edo period was a long period of peace, the main tower was not rebuilt. Thus, there are only a few paintings, which have the old tower standing.

As can be seen on the left side of the drawing, the main castle tower was already missing, it burned down at the beginning of the Edo period, after a lightning struck it. As the domain lord lived in the palace below the castle, there was no need to rebuild it during the peaceful Edo period.

The castle ruins can be reached by walking up the mountain pass or by taking the shorter route and getting on the chair-lift. Both start from the road, connecting the Taikodani Inari Shrine with the town. One can walk up the 1000 torii gates to the Inari Shrine, leave the shrine on the other side through the parking lot, and in about 4 minutes, there is a road and after another 3 minutes a chair-lift on the right.