A brewery from the Kyouhou period (1716-1736) that continued business until recently. The building is from early Meiji period (1868-1912) with a front gate on the main Honmachi street. On the main street there is only one more mansion remaining with a main gate, the Zaima family’s mansion. 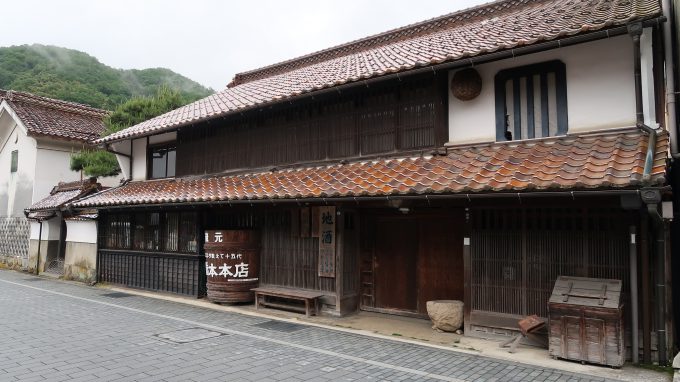 The shop is a wooden 2 storey structure with a tile roof, with kirizuma style.

The style of the roof is called kirizuma-zukuri with pantile roof tiles and a smaller roof attached along the facade of the building. The first floor has a big white facade and three mushi-ko-mado style windows. On both side one can see sode-udatsu, which are small walls jotting out of the surface, to prevent the spreading of fire from the neighbouring buildings.

An inner garden named “Suiunen” (meaning) is facing the formal Japanese tatami room, with borrowed scenery of Mt. Aono. The painted old sugi wooden doors from the domain lord’s palace are still preserved on the premises.

An interesting feature of the Hashimoto brewery is the small fixed part of the door (seen on the left side of the following photo). 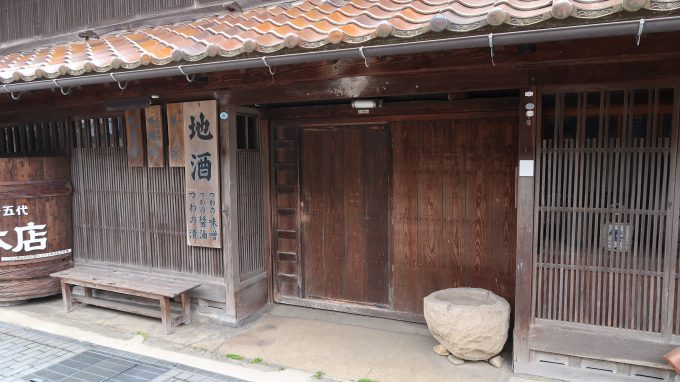 The name of 座頭さぐり (ざとうさぐり – ZatouSaguri) seems to be only used in Tsuwano, but this architecture element is widely used across Japan. The small fixed partition of the door is there to make the door lighter and cheaper. Building big sliding doors both take resources (extra timber) and also makes it difficult to open and shot the door. In Tsuwano it has a special name, which can be directly translated into “blind man’s plank”. It is said to guide the hands of blind patrons of a given shop, but most probably it is only a naming, rather than an explanation of the function it serves.